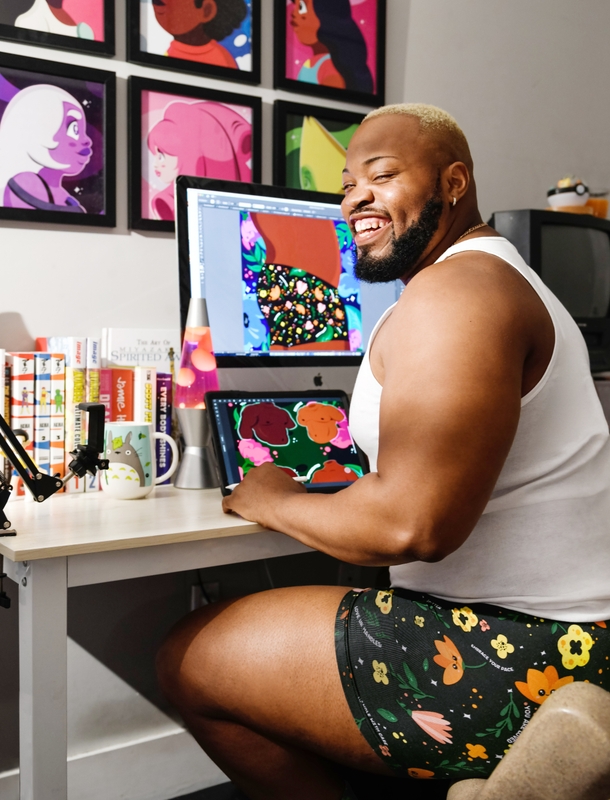 As a multifaceted, talented New York City-based graphic designer with a love for all arts and aesthetics, Thaddeus is known for his vibrant, diverse imagery around amplifying Black voices. His recent publication of the children’s book ‘Shine: The Podderite Chronicles’ follows a diverse group of kids who embark upon an out-of-this-world adventure. Known on social media as Hippy Potter, his energy is contagious, his dance moves have gone viral, and his style turns heads. As a lover of pop culture, his passion and bright personality is a staple in his work, guaranteed to brighten your day with his bold and revitalising energy. His joy, smiles and confident attitude are what everyone loves about him.

Becoming a household name in 2018 with the American Eagle ‘Ne(X)t Level Jeans Campaign’ Thaddeus encouraged people to ‘embrace your unique shape and size’. He has featured in publications such as GQ, Ad Age Publication, Afro Punk and was named in OUT Magazine as the ‘Black Queer Plus-Size Model we need.’ He was also mentioned in Teen Vogue where they praised American Eagle for choosing him to front their campaign.

Thaddeus is an Ambassador for Adobe Max and has built a multitude of digital partnerships with the likes of Durex, Jack’d, Savage X, Bumble and more. He has also modelled for Target, Bonobos, Savage, Nike, Lee Jeans, Wrap &Weft, Good Counsel, and Starbucks along with many more amazing brands. In 2022 he partnered with Pop-Tarts; directing and illustrating the launch of the brands first ever artist collaboration for Pride, and MeUndies; designing and modelling his own pattern design for the LoveWatts collection!

In an interview for the Queer Network, Thaddeus relays ‘I have always been stylish, but I have had to be smart about being stylish, I couldn’t wear the clothes in GQ Magazine because they didn’t make them in my size. At an earlier time, I had to think smarter about how I would do fashion and GQ slogan is ‘look sharp, live smart’ so I was like, let me just live smarter about that.’